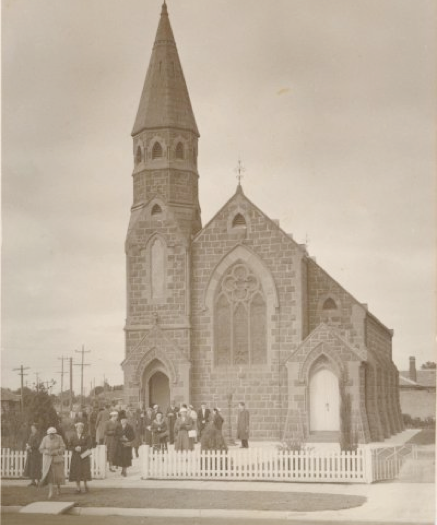 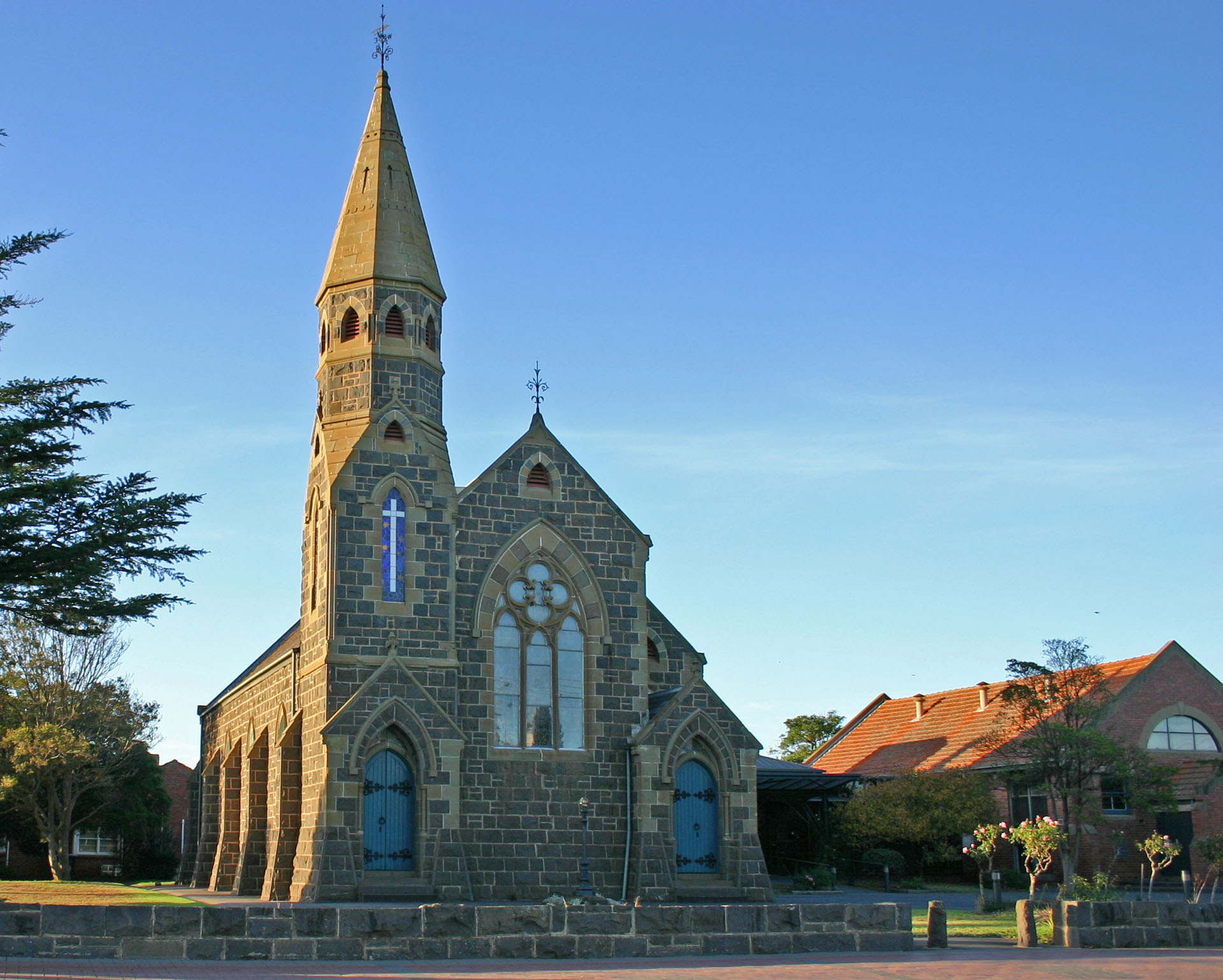 On the 5th of February 1884, Thomas Chirnside laid the foundation stone of the Werribee Presbyterian Church, to be known as St. Thomas the Apostle, now known as Crossroads Uniting Church. The church was erected on his own land and the entire cost of the construction of the Church and Manse was ₤3500 paid by Mr Chirnside

Together with the old manse nearby, the church was placed on the Register of Historic Buildings (no.628) in 1986.

Building is constructed of bluestone with Barrabool sandstone used for quoins and detailing.

Messrs Harding and Holyoak of Geelong built the church and manse designed by the eminent Geelong and western district architect Alexander Davidson.

The church is the last of a small number of churches designed by Davidson and his partner George Henderson in the French Gothic mode which they favoured. It features a distinctive octagonal tower with engaged colonettes and a stone spire. The initials TC form part of the design of an iron weathervane at the top of the spire. The interior of the church is notable for its timber ceiling and roof trusses decorated with carved eagles, the Chirnside family emblem. In this respect the interior resembles the billiard room addition built in 1883 at Werribee Park and also designed by Davidson.

In 1897 George Chirnside (a nephew of Thomas Chirnside) had a family pew made for the church. Originally containing six seats the elaborately carved English oak pew was raised and enlarged in 1956 to accommodate the choir. The pew is still in use.

The bluestone manse is a highly intact single storey domestic building with double gable ends and fretwork bargeboards to the street elevation. The front veranda features the distinctive patent case iron details that were characteristic of the work of Davidson and Henderson.

St Thomas's church and manse are together an important part of the built evidence of the Chirnside association with the Werribee area, Werribee Park and Point Cook. These two buildings and the land are illustrative of the patronage by which Thomas Chirnside sought to recreate in Werribee the way of life of an English country gentleman.

Following its formation in 1977 the Uniting Church in Australia conducted worship services in both the St Thomas' Presbyterian Church as it was then known, and the St Luke's Methodist Church, which was situated further along Synnot Street.

In 1989 a rationalisation of church property resulted in the sale of St Luke's and the subsequent redevelopment of that site for commercial use.

Restoration and redevelopment works completed in 1991 resulted in the Crossroads church being linked to the hall, providing the integrated complex that is now used for multiple purposes by the Crossroads congregation and community groups.

Memorial: Infant Chirnside.
Believing himself to be bankrupt, Thomas Chirnside shot himself in the laundry of Werribee Mansion in 1887 and his brother Andrew died in 1890.
In August 1895 Andrew’s widow, Mary (nee Begby), commissioned Ferguson & Urie, of Franklin-street Melbourne, to create a three light stained glass window to be erected in their memory at the east end of the church. The window was erected ten months later, in June 1896, and depicts the Last Supper.

The following articles appeared in the Bacchus Marsh Express;

“Messrs. Ferguson & Urie have been busy this week placing a handsome stained glass memorial window in the Presbyterian church here. The work was ordered last August by Mrs. Andrew Chirnside, senior, Werribee Park. Further particulars will be given next week.”

The Bacchus Marsh Express (Saturday 3rd June 1899, page 3) reported on the installation of the windows.

“This week and exceedingly appropriate, and very chaste, richly-coloured stained glass memorial window, by Powell, of London, was inserted in the Presbyterian church here in memory of the deceased infant son of Mr. and Mrs. George T. Chirnside. The window is placed immediately behind the Werribee Park pew in the east side of the church; and the colouring is sufficiently deep and rich in tone to stand the full effect of the forenoon sun. The subject of the window is admirably suited as a memorial of one that died in infancy, the symbolism being that of a flower plucked from God’s fair garden of infant life, by God’s angel, and borne upwards to heaven, while underneath is written, in quaintly artistic characters, the motto – “Suffer the little children to come unto Me.” The working out of this symbolism by the artist in stained glass work has received very careful treatment. The principal figure in the window is an angel with a fine, intelligent looking, thoughtful, face, bearing in her hand a flower, in the form of a lily, which has just been plucked from the rich, variegated, profusion of flowers growing in God’s garden on the earth beneath, as depicted in the lower part of the picture, and ascending with the plucked flower above the clouds upwards to the bright light of the open heaven above at the very apex of the window, while 7 cherubs, (7 being the perfect number) indicating the angel spirits of little children, descend to meet and welcome the return of the angel with the flower she has just culled. The bodily form of the angel shows, in finely moulded shape, through the diaphanous robe, of an ivory satin tint, reaching down to the ankles; while the upper part of the body is further clothed with a kind of mantle in old-gold tint. Then the angel’s wings are done in an exquisite ruby tint, and the same tint is used for the wings of the seven cherubs above. The dark blue background of the picture indicating the sky, with lighter patches here and there indicating clouds, gives a soft subdued effect which is very pleasing to the eye, and presents a marked contrast to the other windows on both sides of the church, with their somewhat garish glare of light. A brass plate, bearing the name, and date of death of the deceased, will be affixed to the sill of the window, to complete this very chaste and appropriate memorial.” 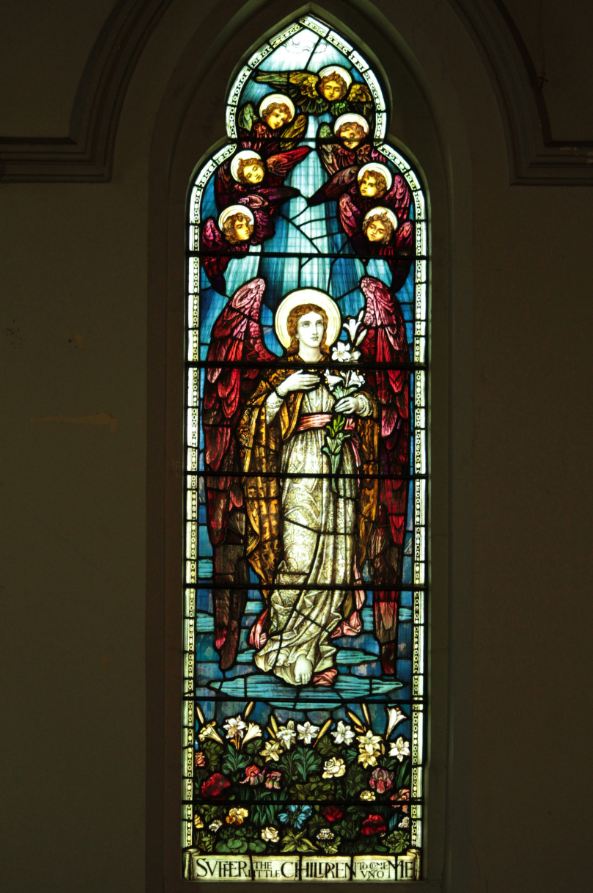 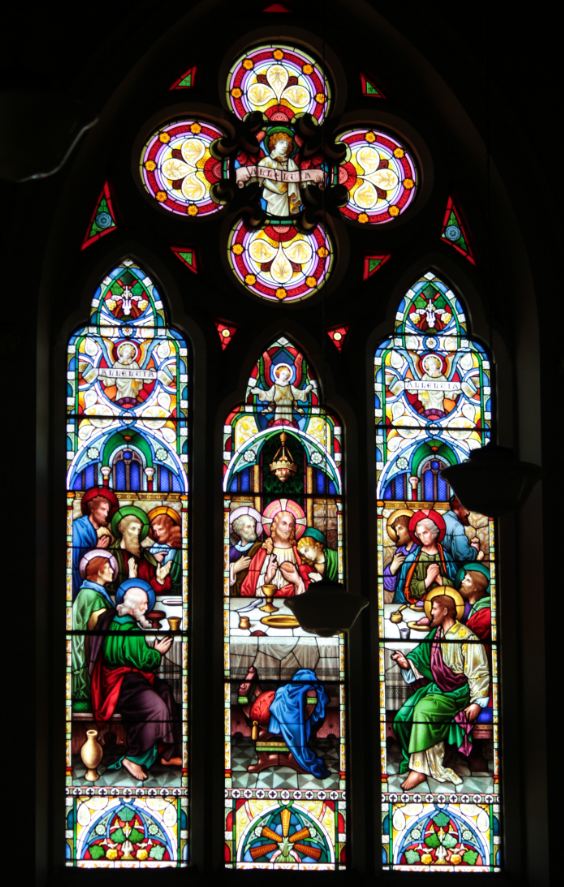 “A memorial window recently placed in the Presbyterian Church at Werribee by Messrs. Ferguson & Urie, of Melbourne, to the order of Mrs. Andrew Chirnside, Werribee Park, is an admirable piece of stained glass art. The pictorial subject chosen – The Lord’s Supper – fills the three panels of the large gable window of the Church. The centre panel contains three figures, our Lord in the central and prominent place, and the two apostles, Peter and John, on His right hand and left hand respectively.

Each of the two side panels contains the figures of five apostles, suitably grouped at each end of the table. Above the principal picture, filling the sharp-pointed arches of the three panels, are placed the figures of three cherubs or angels, the two side ones bearing scrolls with the inscription “Alleluia” thereon, while the bottom parts of the three panels contain, as emblems, a few heads of wheat, and bunches of vine leaves and grapes. The scroll work filling the large arch of the window itself is also suitable stained, with a larger cherub of angel in the centre bearing the inscription “Alleluia.”

The whole effect of the window, particularly the principal picture, as seen from the centre of the church, in the soft morning light, is very pleasing, the colouring being at once rich and chaste. The scene of the picture is particularly natural, and the various details thoroughly in keeping with the subject. The picture represents that particular historical moment when our Lord began to institute the supper, and just as Judas, to whom He had said, “That thou doest do quickly,” was leaving the room to arrange for the betrayal. Judas’ vacant seat, containing his discarded robe, is seen at the side of the table, directly opposite where our Lord is seated; while in the background is seen Judas himself making for the door, with the money-bag grasped tightly in his right hand, and with the usual imaginary “nimbus” gradually fading away from his head. The other Apostles grouped round the table have their eyes directed towards our Lord, who has in his left hand a loaf of bread, and is supposed to be saying, as he points to the bread with his right hand. “This is my body”

While John the beloved disciple, is seen with his hand leaning on Jesus’ breast. At the right and left corners of the table respectively are seen Andrew and Thomas (the former indicated by his age, as having been one of the first to follow Jesus, and the latter by the parted forefingers, referring to his expressed intention to test our Lord’s wounds.) According to the perspective of the picture, and the prominent positions assigned to Andrew and Thomas (being nearest the spectator) it is a somewhat remarkable undesigned coincidence that the deceased gentlemen, to whose memory this memorial window has been inserted in the church which they themselves had built, should have born the same names as those of these apostles – namely the late Messrs. Andrew and Thomas Chirnside.

When taken into consideration along with the many other benefits which Mrs. Chirnside has so generously bestowed upon the church and congregation during the past year, this handsome memorial window ought to call forth heartfelt appreciation of the Presbyterian community throughout the Werribee district, and this appreciation could best be shown by increased attendance at the services, and increased interest in the work of the church generally.” 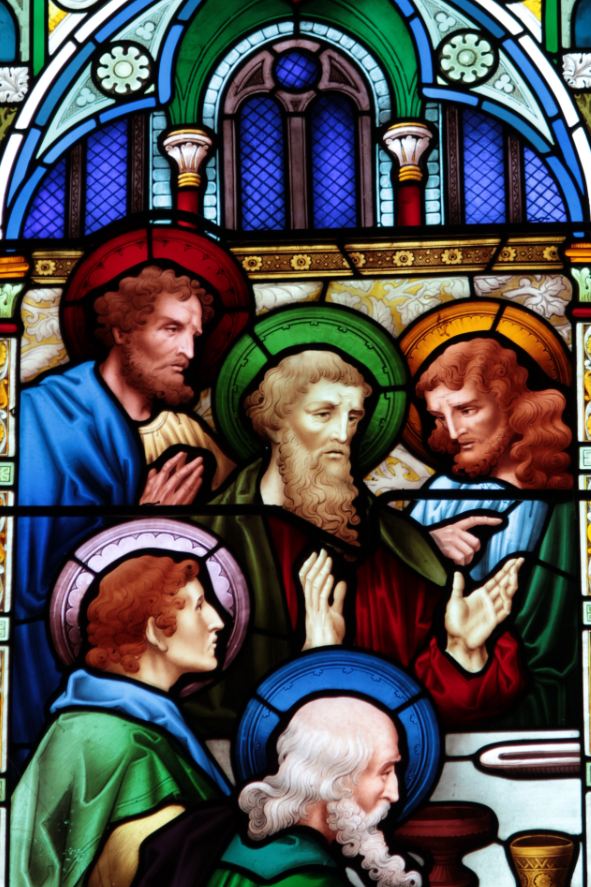 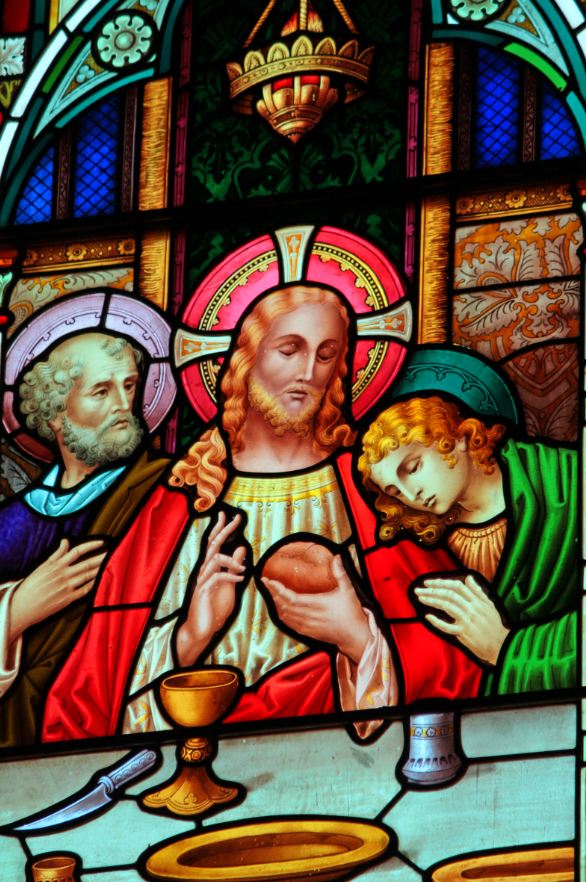 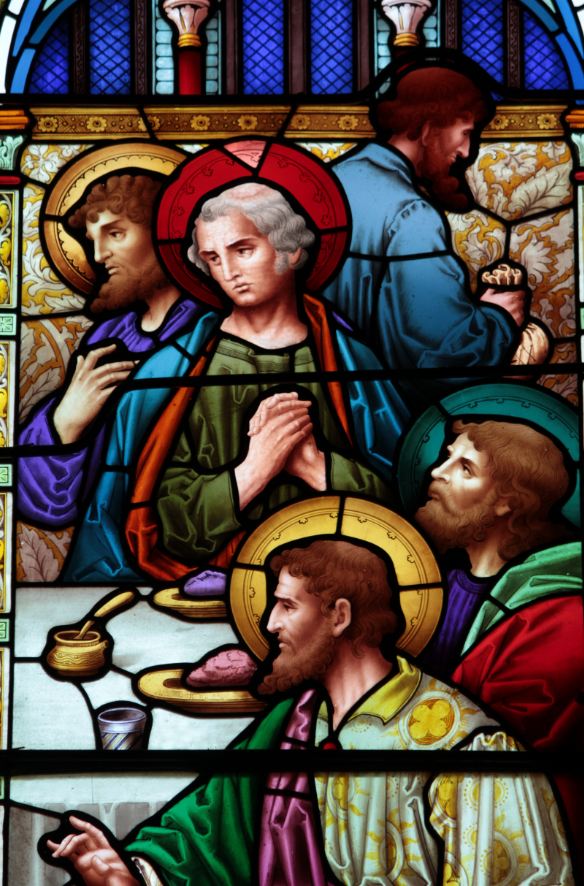 Stained Glass photos and images are the work and research of Ray Brown who has more information about other historic stained glass windows on his web sites; (Colonial Victoria's Historic Stained Glass Craftsmen 1853-1899) www.Fergusonandurie.wordpress.com www.Stainedglassaustralia.wordpress.com