Climate change and the Synod

The Synod of Victoria and Tasmania has passed resolutions relevant to climate change since 1977; however, the last resolution that directly addressed the issue was in 2008. Members of the congregations of the Synod have been expressing greater concern to the Justice and International Mission (JIM) Cluster that the Synod needs to play a more significant role in responding to climate change.

JIM has produced a discussion paper for members of the congregation in preparation for making draft recommendations, and these are as follows. That the Synod:

Recognising the imperative for the Synod to embody its prophetic role in the public sphere and acknowledging our relationship and responsibility within and with God’s good creation:

(a) Acknowledges that God calls us into a particular relationship with the rest of creation. A relationship of mutuality and interdependence which seeks the reconciliation of all creation with God.

(b) Acknowledges the need for immediate and substantial action by governments, businesses and communities globally to mitigate climate change caused by human activity and the threat it poses to God’s creation.

(c) Thanks the Commonwealth Government for its efforts to promote greater recycling and reduction in waste generation in Australia.

(d) Calls on the Commonwealth Government to commit to: (1) sufficient actions for Australia to contribute its fair share towards limiting global average temperature rise from human activity to 1.5°C; (2) net-zero greenhouse gas emissions by 2050 at the latest; (3) no financial or other support for new coal-fired power stations; (4) no approval for new coal mines and coal mine expansions of existing mines; and (5) meaningful engagement and support for communities dependent on coal mines or coal-fired power stations for a just transition away from financial dependence on fossil fuel production and consumption.

The scientific evidence is that climate change is already causing severe harm to the lives of hundreds of millions of people across the globe. Climate change will cause increased extreme weather events (floods, droughts, heat waves), rising sea levels and loss of food production.

Addressing human-induced climate change will require a sustained global effort over decades to come to reduce the risks of climate change.

The paper prepared by JIM, which is available online at https://justact.org.au/climate-justice-creation/reports/, has a readable executive summary that is aimed at resourcing Uniting Church members so that they can have a say on the position that the Synod adopts on climate change. The JIM Cluster is keen to hear from you on what action the Synod should take. Written feedback can be sent to Justice & International Mission Cluster, Centre for Theology and Ministry, 29 College Crescent, Parkville 3052 or by email to mark.zirnsak@victas.uca.org.au. A phone conversation can be arranged on 9340 8807.

Worship Plan for this week

Due to the Coronavirus pandemic, all services of public worship are being held online until further notice.

Prayers of the People: Mary Dixon

Join us in prayer for 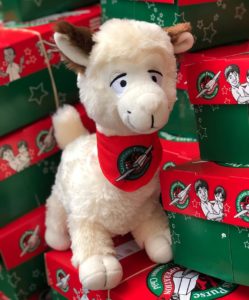 OCC is a project of Samaritan’s Purse. It partners with local churches in developing nations to reach out to children by providing gift-filled shoeboxes and bringing the Good News of Jesus Christ. After receiving shoebox gifts, many children are also invited back to participate in The Greatest Journey – an evangelism and discipleship program. Will you join with us to help us reach more children with gift-filled shoeboxes? This year more than ever the children are in great need of our support. Covid-19 has hit countries such as Philippines, Fiji and Cambodia hard. Empty shoeboxes and more information are available from Rose Geilen.

Glenyce’s dad ran a soldier settler farm for many years; Glenyce attended Beaufort High School (a photo of her teachers includes a young Miss Bev Lambie) and on to Ballarat Teachers’ College. Kim attended Werribee primary School, then moved to Ararat High School, and completed his Accountancy Diploma at Ballarat School of Mines.

Glenyce taught at primary schools in Ballarat and (after marriage) at Laverton; later she worked at Williamstown Naval Dockyard and the Commonwealth Bureau of Statistics; then as a teller with the National Australia Bank for 22 years, retiring in 2018.

Their three children are Stuart, Alistair and Fiona; and they are glad to see their six grandchildren now that Covid19 regulations are being eased.

Kim’s accounting life early was with Deneys haberdashery stores; then in public accountancy and financial advisor practice in Werribee until his retirement in 2018. Membership of Werribee Rotaract was Kim’s introduction to Rotary, with which he’s been involved for 47 years in various roles.

Kim grew up an Anglican, involved in church youth activities and is a Queens Scout. After they were married at the Presbyterian Church in Beaufort, and later joined Crossroads Uniting Church.

“We were both teaching Sunday School with John Hosking,” says Glenice.  Kim was Uniting Parish Council treasurer and treasurer of Werribee Support and Housing, for nine years. “I remember the excellent leadership of Carol Muir, executive officer, and the strong support of Wyndham City councillors, Henry Barlow and Heather Marcus,” says Kim.

“We have both been involved in Werribee River Association; Kim also has been treasurer of the Council of Wyndham Central Secondary College, since it was Galvin Park Secondary College”, they say.

The Deneys family are faithful Christians serving their community. (NT)

Pastoral care will be maintained during these difficult days but it is subject to the rules regarding access to hospitals and aged care homes.